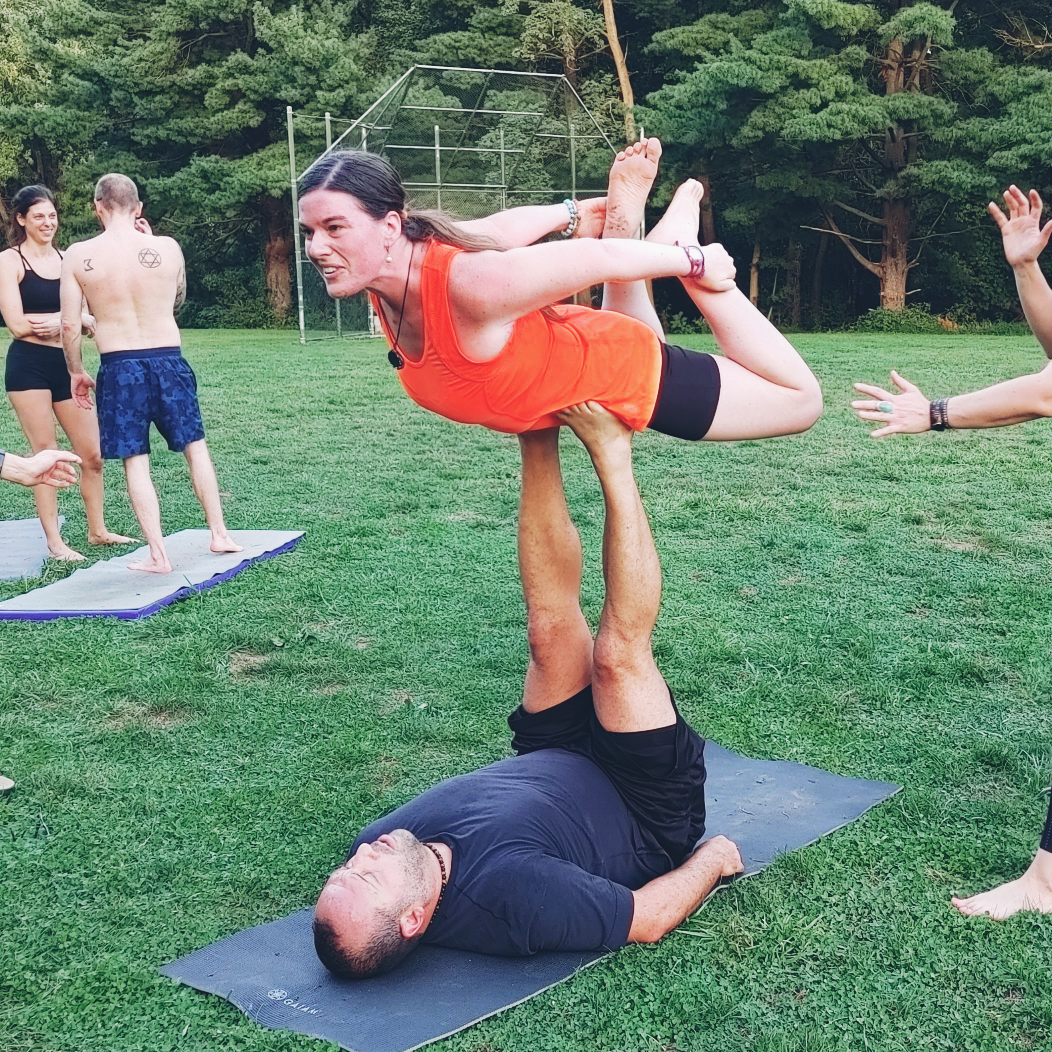 A Circus Mind is the Best Medicine

Currently, 5.3 million Americans are living with disabilities stemming from traumatic brain injury (TBI), including problems with cognition, movement abilities, sensation, and emotion. My friend Ashley is one of those 5.3 million.

I met Ashley this summer at a partner acrobatics event, a sport I have a great passion for and a community I’ve been a part of for a little over a year. A mutual friend introduced us. As Ashley approached me, I knew something was different about her. It’s interesting when you consciously catch yourself trying to figure out “what’s wrong with someone”. I didn’t know her situation but having grown up with a sister who had severe developmental disabilities and was never accepted, I felt drawn to her and wanted her to feel welcome. Ashley moved differently. She spoke differently. She had a contagious smile and a magnetic aura about her. I didn’t know that Ashley had been quite active in our acrobat community in the past. My brain was busy trying to construct her story drawing from past experiences and interactions with people who looked like and behaved like her. She was quick to clear up any potential misunderstandings about “what” she was. She was….well she is, a survivor. Ashley and I became fast friends.

On August 31st, 2018, Ashley woke up excited to head out and conquer her first 5.11 mountain climb. She was an experienced expeditionist and certified wilderness survivalist, a former Navy Fitboss, an athletic trainer and an acrobatics enthusiast. She had trained extensively for this day. Unfortunately, Ashley would never make the climb. Nothing could have prepared her for an accidental slip while location scouting that sent her tumbling 40 feet into a tree with no protective gear. Ashley would spend the next several months in an induced coma with swelling in her brain. Doctors were certain she would not survive… but she did.

In a society with cultural norms and deep biases that have defined boundaries and created limitations around abilities based on what is visible, Ashley emphatically refuses to accept the inclination to label her as disabled. Ability labels have not served Ashley’s recovery process (why would they serve anyone’s recovery process?). How does one go from a life of being pushed and challenged around what they can do to a life where one is consistently told what they can’t and won’t do…ever? Recovery has been a long, traumatic and often undignified journey that has largely resulted in frustration and a sense of placelessness. Both her physical and psychological rehabilitation have been largely contained to immersing her in environments and support groups with other brain injury survivors, even though no two TBIs are the same.

The day I met Ashley, she had decided to take a leap of faith and return to her love of circus sports and partner acrobatics. And while things started out a little rocky (no pun intended), it had been over 3 years since she had engaged in anything of this nature. Remarkably, within a relatively short period of time she started to experience some noticeable improvements in her balance, dexterity, and general mental health. Trust is a major challenge for TBI survivors. The partner aspect of the sport has helped Ashley to tackle enduring issues related to fear and trust. Equally as compelling are the benefits the community has experienced from exposure to and the ability to partner in practice with with her. The community, representative of a diverse cross-section of humanity, is kind, accepting, patient, understanding, and eager to see her improvements. Having her back in our community has not only benefited her physical and psychological recovery but it has helped the larger community to shift mindsets and challenge biases around what we believe is possible based on what we see. Overarching all of this is Ashley’s spirit and resilience which is nothing short of inspirational.

I tell this story selfishly first because I’ve been a beneficiary of having Ashley in my life. I also tell this story because I believe in the value of challenging everything we know to be true about others and the beauty that comes from opening one’s mind to doing things differently and thinking about things differently versus focusing on what is different. In this case, circus sports, specifically partner acrobatics, has proven to be a viable form of community-based rehab that empowers both the brain injury survivor and the community that integrates them. It combines several key elements that are critical for brain injury recovery including but not limited to balance, muscle memory, fine motor skills, dexterity and communication skills. Additionally, given the partner aspect of the practice, the survivor is organically integrated into a caring community which provides the TBI survivor with a safe, accepting and motivating environment in which to overcome fear and build trust. Equally as compelling are the benefits to the diverse and accepting community that integrates them. With courage and compassion, Ashley and our acrobatics community can move mountains, literally and figuratively. I am privileged and grateful for the opportunity to be a part of it.